Fully expecting to suffer greatly going uphill and glide majestically going down, my latest trip cycling the legendary Alpine cols of the Tour de France yielded some surprises. The usual (unintentional) formula for my trips held true, where I return significantly more bruised having learnt some important lessons, but ultimately have a merry time. Expectations were not met for better and worse, and I have since had to scrap the article I was naïvely writing in my head before my tyres had even kissed French tarmac.

We had already crossed the Alps by bike, and this was with what felt like the weight of forty elephants mercilessly stuffed into pannier bags and strapped on with B&Q bungee cord. But this was after nearly two weeks of intensive training in the legs en route from London, and I can’t help but feel that what got us over was a dogged amateurish determination that may have waned somewhat in the six years since. Arriving in a dark downpour after a sapping 15 hour drive, we were keen but nervous as to what our legs might find.

Nothing on the UK’s roads can prepare you for over 30 kilometres of uphill, and to this end the sensible tactic is to break ascents into chunks. Hairpins naturally do this for you and offer some respite in the shallow side. Better yet are cyclists up ahead, the lycra-clad carrot dangling in front of me, the two-wheeled, panting donkey (need we draw out this analogy any more?). Having someone in your sights igniting that little spark of competitiveness just makes the legs turn that bit easier.

Atop the Col du Mollard, having achieved the small personal victories of not using my smallest gear (34-32 for those who care) and not vomiting up my lungs, I felt ready for another ascent. We started our first descent after the obligatory selfie by the sign and polka-dot bike. I took it fast and so did Adrian, believing my bike handling skills were up to scratch given all the dodging of smartphone wielding zombie-pedestrians I do in town. Inevitably, up ahead I saw that he had missed a corner and was negotiating the grass on the inside of a tight hairpin. In a textbook example of target fixation, busy watching and thinking “Ooh, mate, hope you don’t fall off,” I quickly found myself following him into the same bit of grass, only I got a bit more intimate with it. A screech of brakes was followed by a swift trip over the handlebars, an act I later justified to myself as a rite of passage for any serious cyclist (next stop: broken collarbones and EPO and testosterone into the buttocks). Adrian reminded me, “There’s not a single great descender who hasn’t ever crashed.” I hasten to add that there’s also plenty of crap descenders who continuously crash.

A Tour classic, the Col de la Croix de Fer from its harder north-eastern side was next on the menu. After gingerly navigating the remainder of the descent, we found ourselves gently climbing through the village of Saint Sorlin d’Arves when the road turned sharply upwards. I realised the gradient of 8-9% wasn’t letting off any time soon, so I settled into a sustainable rhythm and enjoyed the ever expanding views over the magnificent Aiguilles d’Arves.

At the ninth hairpin, the Alps neared topographical perfection with the peaks beautifully reflected in a small lake scattered with people enjoying a spot of fishing. For a brief moment I wondered why we ride bikes up mountains and saw the appeal in more sedentary pursuits. It was only a brief moment however, as upon rounding the next and final hairpin I could taste the top and I was feeling good. I got out of the saddle, shifted up the gears and the col abruptly sprang upon me. Following a white-knuckle descent off the Glandon leaving me feeling like a rag doll operating a pneumatic drill, we were soon back at the campsite quaffing bagged wine, congratulating ourselves on a good first day. Strava (an app for tracking your times on specific segments of cycle routes) informed me that I was the quickest up the route that day, managing 34 minutes. Feeling unstoppable, I was instantly brought back down to earth, checking the all-time leaderboard to find that French pro Thibaut Pinot gobbled it up in 19.

Refusing to heed the warnings coming from Adrian’s right knee, our next day saw us take on the 2645 metre Col du Galibier. The long straight road out of Valloire through meadows in the ever increasing shadows of the Massif des Cerces offered stark contrast to the arborous twists and turns of the Col du Télégraphe, a not insignificant obstacle to overcome before starting the Galibier route proper some 20 kilometres into our day. The watershed moment came at Plan Lachat, where the reward for stolidly pressing on and refusing to stop at the café was an unremitting ramp.

The subalpine yielded to the alpine giving the thinner air a crispness that chilled my abundant sweat. In contrast to the emptiness of my surroundings, the graffiti left on the tarmac reminded me that these roads frequently host thousands of people, creating and witnessing some of cycling’s greatest scenes. “Better than the office?” read one message, a question far from rhetorical for the wheezing, very pink people I passed. Another read “don’t forget to look up”, followed by “WOW” and an arrow pointing to the grandeur in front of me. Unfortunately, this also drew my attention to the miles of road still to come high up the mountain, where the sun glinted off what I could only assume were cars somewhere near my destination. The final kilometre is a cruel 11% grind where I finally gave in to my smallest gear, but with road running out my pain was short-lived and I again bounced out of the saddle to the top. 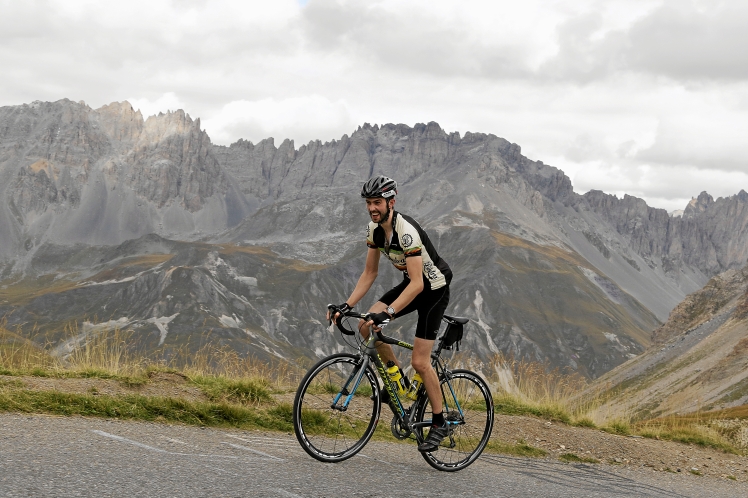 Adrian chose to listen to his body and opted for a campsite-bound day watching “The Wire” and reading obscure Spanish literature. The sympathy I felt due to previous knee problems of my own was far outweighed by the urge to get back on the bike. I set off for the Croix de Fer from the southern side, judging Adrian to be big enough to look after himself. The southern side, whilst spectacular, is longer and less popular, and despite the glorious weather for riding I barely saw another soul. The spectators that throng the route on race days were reduced to a single marmot hunched by the side of the road, eyeing me with an inquisitive look that seemed to ask “Why do you do this stuff to yourself?” (though I’d similarly like to ask the marmot why in a region so blessed with a plethora of different, delicious cheeses it would choose to dine on grass and lichens). In my lack of company I resorted to singing songs to the goats and loudly cursing the frustrating sections of downhill that ruined all of my good work.

Adrian was significantly bored by the time I returned and in need of a change of scenery. We explored Bourg d’Oisians, a town in a sleepy state due to being neither high cycling season nor the skiing season. The cigarette-machine-cum-inner-tube-dispenser showed that this town is serious about its cycling, as did the glut of cycling shops, replete with everything bike-related that we slowly picked our way through only to buy a pair of socks.

Riding your bike up Alpe d’Huez is akin to having a kickabout at Wembley, or knocking some balls over the net on Centre Court at Wimbledon. These hallowed 21 hairpins have been the stage for some of the finest moments in Tour de France history, and it was a matter of metres from the entrance of our campsite. The climb is perfect: the hard stuff is over after the first couple of kilometres, the surfeit of hairpins offer plenty of opportunities for rest, the road surface is like riding on carpet and there is a bar at the top that makes a delicious croque monsieur.

Up to this point on the trip I hadn’t yet been overtaken, but with the sheer volume of cyclists on this climb it was only a matter of time. Sure enough, after hairpin 10, caught unawares as I was opening a gel, a small man in full Rapha gear (super-expensive clothing for those not familiar with cycling paraphernalia) danced past me without so much as a “Hello.” It’s not nice to be passed on a climb, so I had been making the effort to be friendly as I rolled by others. Peeved that my goodwill wasn’t being returned, I chased and got onto his wheel. I was buoyed to see that he was in and out of his saddle, puffing and looking over his shoulder surprised to see me. I stayed seated and managed to stay glued to him until the next hairpin, where I realised that I was puffing harder and that the occasion had gotten to me, making me look a bit silly. I slackened my pace and was content to pick off the elderly instead.

In a consummate display of poor planning, I gave myself no recovery time after getting home and had to be in work early the following day. Resplendent in my Alpe d’Huez branded socks complete with pixelated red marmot, I felt like king of the cycle lanes. I arrived at the bike lock-up in record time and excitedly waxed lyrical about my trip to my colleagues’ blank faces. A month on and I’m still feeling strong; I laugh at southeast England’s meagre inclines and am convinced that my socks and cyclist tan lines make me ride faster. That and the stubborn blood stains on my jersey from my crash add a touch of badass to my otherwise ridiculous cycling get-up.