I, like many walkers, admit that my navigation could do with a bit of touching up. Or not so much touching up as gutting and a full renovation. Londoners don’t get lost in London, it’s impossible. If you have a vague sense of direction you can always find your way around in the centre of town, even if it’s not the quickest route. Some time ago, I naïvely took this confidence into the hills with me.

There have been times where my sense of direction and primitive navigation skills have been called upon and I’d always come good. With hindsight this was luck rather than ability. There was always another walker to follow who had a stride that said “I know where I’m going”, a merciful break in the weather would frame our route perfectly, or I’d simply stumble upon a way-marker/cairn/path that would save me from actually “being lost”. Once, none of these things happened and we really were lost, on a ridge of all places.

Surely someone who achieved this near impossible feat of navigational error doesn’t belong in the outdoors and should probably instead take up knitting before he gets himself killed? A few things need clearing up. We are not talking a knife-edge here, a Crib Goch, where the void left of the ridge is as disconcerting as its neighbour to the right. Trotternish Ridge, the object of this lamentation, is more of an escarpment, bisecting Skye’s north-eastern peninsula from north to south. The eastern side spectacularly collapses into great basalt pinnacles and walls. The western side is decidedly tamer, with no drops and a lot of grass attracting crofters more than climbers.

We (I must stress, three other capable walkers are to share in this shaming) started from the northern end near the Quiraing. This is an area that must be experienced by all who visit Skye; a geologist’s wet dream, it is a stunningly beautiful, ever moving (albeit slowly) jumble of volcanic rock breaking free from the cliffs in search of the waters separating Skye from Torridon to the east. A well worn path prevents even the navigationally impaired from getting lost here. In all weathers it is an awesome spectacle and is fairly straightforward. 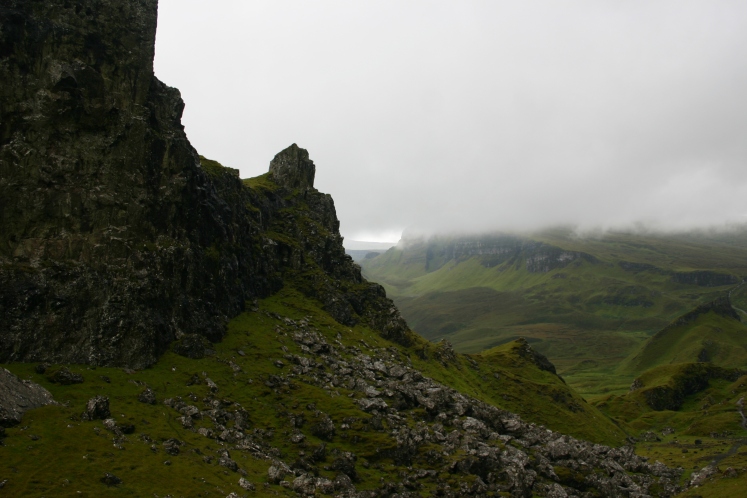 The car park at the southern end of the Quiraing spells a change in terrain. Before, the path guided us through the middle of the rock medley, now the track (or slightly-more-trodden-on strip of grass) sticks along the verdant top of Trotternish Ridge. This is about as good as the path gets from here onwards. Being a popular ridge walk we assumed there’d be more of a track. As slightly-more-trodden grass gave way to not-so-trodden grass, navigation still didn’t seem like an issue to us. After all it’s a ridge. Keep the fringe close enough to our left and the map needn’t see any action.

Staying within sight of the edge in good visibility wasn’t a problem, but like so much of the west coast of Britain, Skye has very changeable weather and each part of the island exhibits its own microclimate. Inevitably, the Herbridean murk closed in like a meteorological tourniquet, and the once expansive views to the Storr and the mainland quickly disappeared. Now we had to keep the edge even closer as our visibility significantly reduced.

The ridge by no means cuts a perfect line north to south. It deviates, there are false edges and some parts double back on themselves. The full traverse is nearly a 23 mile day, but this doesn’t follow the exact crest all of the way; it cuts past certain parts. Were we to stick to the edge all the way, taking every fold, groove and undulation and we may still be there today. If you need to get from A to C, it’s okay to miss B if you can see where C is. We skipped B in poor visibility and ended up somewhere in Wingdings. 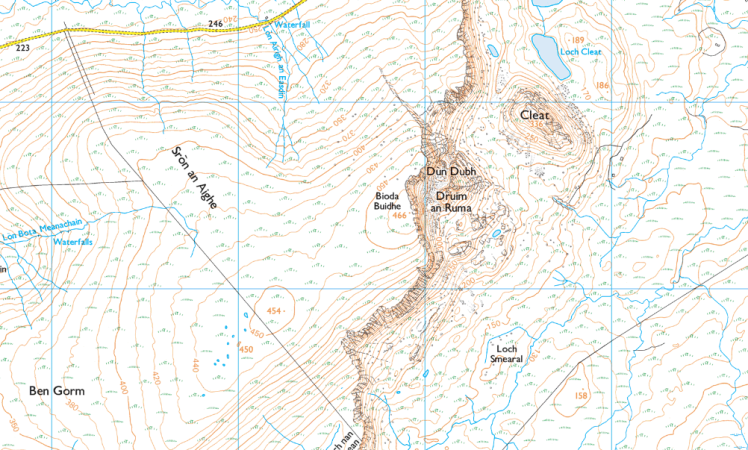 With heads down as we stoically marched into the rain and wind, we quickly lost track of where we were, our biggest mistake. We all knew how to take a bearing, but when this crossed our minds it was too late as on the featureless muir we didn’t know where to take a bearing to. Follow it south and we could end up miles from the ridge. In an attempt to rediscover the edge we went east, but the ridge is discontinuous in places and instead stumbled upon indistinct, featureless grassy slopes that made us question our compass needle (a not so stupid question to ask in Skye given the quantity of magnetic, compass-interfering rock).

Even as I write this and look at the map I think “how on earth did we manage to get lost here, even in poor visibility?”. I’ve recounted our systematic failings but still think that if I were in the same situation now I’d be fine. But things are always different when immersed, where our errors were compounded by tiredness, taking a beating from wind and rain, and a small dose of panic thrown in for good measure. After arguing for a bit we bailed west. We at least all agreed that the A87 was somewhere down there and that Skye’s (surprisingly efficient) bus system was an attractive prospect.

This isn’t the only time I’ve failed to complete a walk, my outdoor exploits are liberally sprinkled with failures. Previous escapades have prematurely ended with injury, exhaustion and midge attack. However, such failures are useful learning tools. We saw a long ridge walk and assumed a strenuous but straightforward day based on experience of similar walks in clear weather and an expectation of paths that weren’t there. We also only consulted the map when it was too late. I have since found myself in similar situations and have not made the same mistakes proving this experience wasn’t wasted on me.

So it is with excitement, some trepidation but ultimately an eagerness to learn that I go out wondering what my next grand fuck up is going to be.

2 thoughts on “Lost on a Ridge”