The Grand Canyon, Mount Rushmore, Yosemite, Manhattan: they’re all great places to visit, but they are the bread and butter of American road trips. How about spreading some fish paste, nutella and tabasco on that bread, and see the wacky things that are still capable of taking your breath away, just in a different way…

At a roadside shelter in the Chihuahuan Desert, we waited only a couple of minutes before the already bizarre Marfa put on its most bizarre show. The small lights in the distance blink and pulsate, appear and disappear, changing from red to blue to orange to purple. They bob up and down and move side to side. They merge together and split apart. Any ideas what they are? Me neither.

With reported sightings since the 19th century, they are unlikely to be car lights, and they certainly don’t behave like any normal lights on the horizon. The scientifically-minded cite swamp gases (oh yes, those wet, swampy deserts) and mystics tell tales of native American tribal spirits. I’m convinced of neither explanation, but after spending two hours freezing my nuts off in the pitch black desert, I’m certainly convinced of their allure.

Please, anything to break the monotony of driving along the flat nothingness of Nebraska! Cars painted grey and stacked on top of each other? Okay, it’ll do. Carved out of old Cadillacs, Buicks and Chevvies and transported hundreds of miles by the ancient nomadic peoples of the Midwest, Carhenge is a great slice of eccentric Americana. I dare you to stand underneath the tall stacks when the wind comes sweeping down the plain (yes I know that’s Oklahoma, close enough)!

Marfa continues to baffle en route to New Mexico on the long, straight roads that criss-cross the vast emptiness of Western Texas. We’re running low on gas, the temperature’s climbing and we’re in need of water, thank God there’s something up ahead. Oh. It’s a Prada shop. An art installation disguised as an incredibly ill-advised retail outlet, it’s attracted thieves and celebrities alike. Designer handbags with Stetsons have never been so in fashion.

The ultimate roadside tourist trap, Wall Drug started life as a pharmacy and has mutated into something so much weirder. When the owner realised that selling pills to the meagre 200-odd residents of this lifeless Midwest town wasn’t going to make him a fortune, his wife suggested tarting it up a bit, offering free iced water and 5 cent coffee (both of which it still proudly offers 86 years later). Now with resident dinosaurs, singing cowboy puppets, a Mount Rushmore replica, a chapel and more tat than you can shake a rattlesnake at, Wall Drug competes with (the real) Mount Rushmore and The Badlands for the title of South Dakota’s finest attraction. 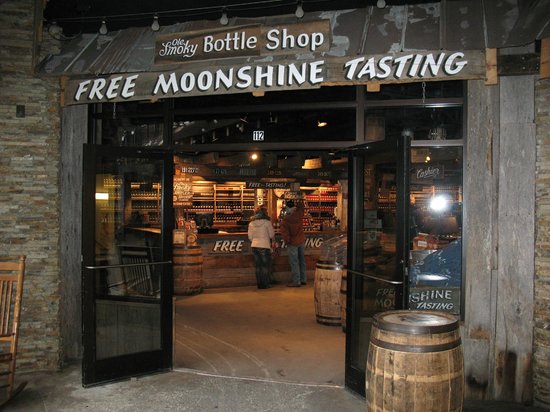 In Tennessee, where the moonshine’s cold but the banjo’s hot, the town of Gatlinburg’s loud attractions and equally loud people are painfully juxtaposed to the natural splendour of the Great Smokies National Park. There’s a fine line between kitsch and downright offensive to the senses. Gatlinburg teeters very precariously on that line. Pigeon Forge, ten miles down the road, tripped over that line and fell down thirteen flights of stairs; it is the gaudiest, most horrific place in the South. Like Vegas meets Butlins for Hillbillies, with a four lane highway unceremoniously smashing through the middle of it. Gatlinburg at least looks somewhat pretty, with it’s faux Bavarian facades and woodland setting.

In addition to the multiple decent pancake houses, the town’s best feature is arguably the free taster session at the distillery that’s been making moonshine since prohibition. With no booking required, one can easily circulate the numerous staff members doing tastings, go out and return with an amusing disguise and do it all again. With some flavours reaching 60% alcohol content, you may even get drunk enough to visit the Ripley’s Believe It Or Not down the road. 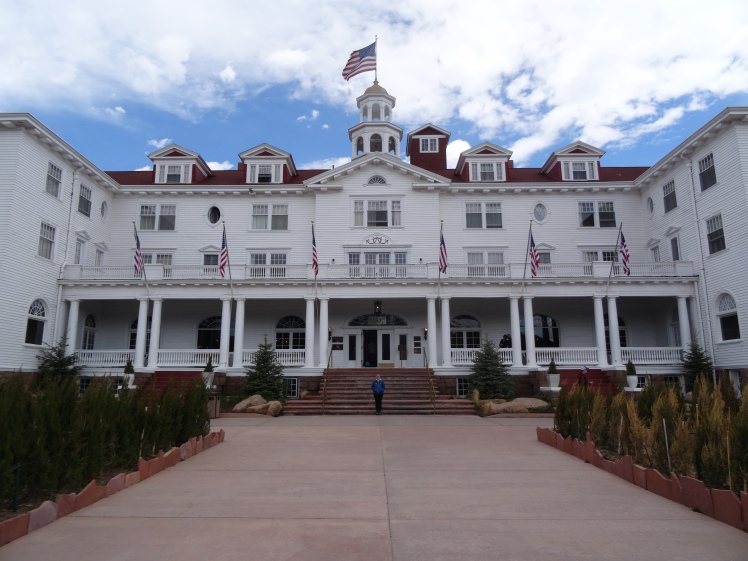 When Stephen King stayed at this hotel on closing day in 1974 , his experience that night birthed one of the great pieces of horror literature, The Shining. Its paranormal reputation is largely centred around room 217, a room that is supposedly frequented by the ghost of a chambermaid who was injured in a gas explosion at the hotel in 1911. Jim Carrey supposedly stayed in this room but checked out in the middle of the night after an experience he is apparently unwilling to discuss.

The hotel was founded by magnate Freelan Oscar Stanley who originally came to Estes Park deep in the Rockies to remedy his ill health. The tour is certainly worthwhile for the history of a remarkable hotel built by an equally remarkable man, and for the book and film references that become apparent. Despite being a natural sceptic, the ghost stories are entertaining, as are the optical illusions in the upstairs hallways. Just don’t be too disappointed if it’s tourists that come flooding out of the elevators as opposed to blood. (Note: the external location shots for Stanley Kubrick’s The Shining are of the Timberline Lodge in Oregon, which is also worth a visit.)

Idaho, the home of the potato, spurns conventional natural beauty with the Craters of the Moon National Monument. The area sits on the Great Rift, a region of dormant volcanic activity that has given birth to the blackened landscapes of solidified lava. Caves, spatter cones, cinder cones and cavities left by obliterated trees remind you that this was a violent landscape and still has the potential to be. Hundreds of hardy plant species are beautifully contrasted with the black, igneous formations with colour so striking that on satellite images it looks like an oil spill.

It feels like a cross between the moon and post-nuclear war Earth, which in this vicinity is a distinct reality given the number of secretive nuclear sites that litter this barren stretch of land. It’s a long way from anywhere, so you have to want to go there, but with its alternative beauty and end-of-the-world feel, why wouldn’t you? 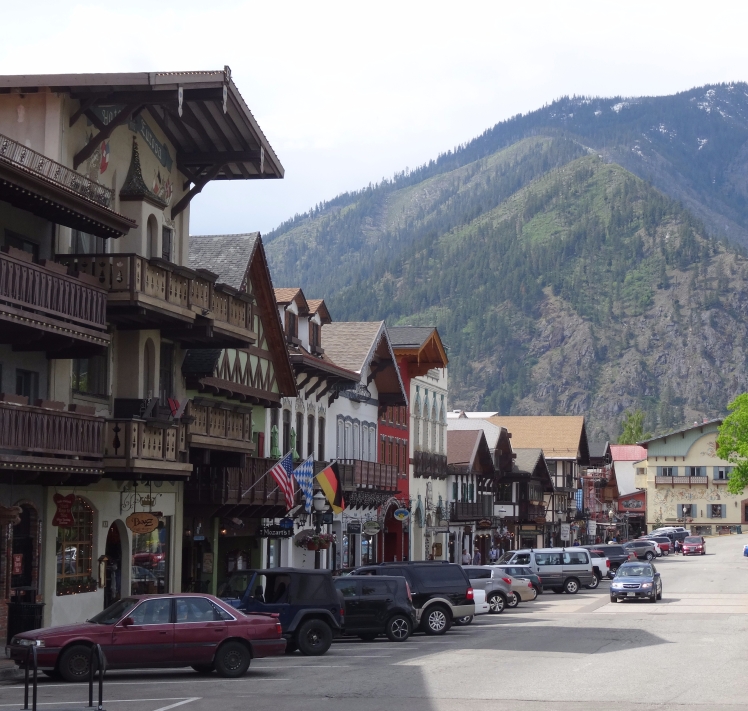 Leavenworth is what is termed a “theme town”. Like Glasgow’s theme is hard drugs and Geneva’s tax avoidance, Leavenworth’s theme seems to be Bavaria and Christmas. When, in the 1960s, the town’s prosperity was dwindling and logging just wasn’t cutting it anymore (ahem), two Seattle bigwigs decided to turn the town’s fortunes around by creating a town that looks like the contents of a snow-globe.

The well-constructed Germanic style buildings look very comely against their mountain backdrop and there’s no shortage of German eateries. I’m sure the effect is much more poignant around Christmas time, but when we visited in May, the festive shops and canned oompah music in the square was just very weird.

The American west is strewn with ghost towns, where settlers left because of dwindling resources or were all eaten by bears or something. Garnet stands out because how well preserved it is. Despite being a pain in the arse to get to (at least it was off-roading in a Chevrolet hatchback, something we signed to say we wouldn’t do), there is a dedicated team who maintain this fantastic piece of Montana’s history. One can stroll around the entire town, entering some of the buildings to get a taste of life as a western prospector.

In the late 19th century it was a booming gold town with 1000 inhabitants who seemed to have life worked out in the Montana backcountry; they had a school, a barber’s, a butcher’s and thirteen drinking establishments! If they’d spent more time looking for gold and less time getting sloshed, maybe it’d still be a thriving community today.

Alongside the general detritus one normally finds under a city bridge sits something typically found underneath a fairy tale bridge troubling goats. This giant concrete troll in the Fremont suburb of Seattle has more of an appetite for Volkswagen Beetles, clutching one in its left hand. The troll sports a hubcap for an eye and has the other obscured by lank hair like the grunge rock pioneers of Washington State. If you can find a parking space on the desperately narrow, steep and unimaginatively named ‘Troll Street’, it’s well worth trip-trapping under this bridge.

The geographical freak show that is Death Valley in Eastern California boasts the highest ambient temperatures on the planet, stones that move independently across flat ground and deathly sharp salt formations. One such formation, the Devil’s Golf Course, is the remnants of the evaporated salt lake of Badwater Basin. From a distance it resembles an expanse of well trodden, soft mud. Up close it is anything but. Rock-hard and razor-sharp, apply any pressure onto it with bare skin and you are likely to come away bleeding. Anyone that does pack their clubs are sure to be disappointed.

The state of Tennessee triumphs again with its cavalier attitude to taste and style. The central atrium of the Opry Resort is like the outdoors, sanitised for the American market. Visitors can enjoy a boat ride on the canal complete with waterfall, and frolic gaily amongst the heavily-manicured plants without any of the annoyances of the real outdoors, safe in the knowledge that an extensive meal of fried stuff with cheese can be found at a moment’s notice.

At the time of our perplexing visit, outdoor lovers were congregated for a convention on the finest of outdoor pastimes, shooting stuff with big guns. The majority of patrons were clad in camouflage and thus blended in with the indoor foliage, giving us the feeling of being the only people in the hotel. It’s very easy to get lost, both inside and in the enormous car park outside where a strict speed limit of 24(?) is imposed. I recommend none of it, but it’s too weird to be missed.