Every year, the Tour de France seizes quiet corners of the country and recreates scenes reminiscent of a refugee camp with lycra. After a peaceful week grovelling up the cols of the Pyrenees, we entered the nothing-town of Mouilleron-Saint-Germain which, for that morning, was the centre of the cycling universe.

This little village was barely on the map, and with a population of little under two thousand people it had easily quadrupled in size. Farm fields became car parks, the tiny tennis club was flattened by a big yellow stage and the Rue du Pavé became a latrine as it filled up with excrement ejected from team buses.

Four days before, having dragged my carcass up the magnificent Col des Tentes deep in the high Pyrenees, I felt humbled and privileged to know that the Tour circus would never see this special and forbidden landscape.

I had put myself through the abject misery of driving 900 miles to get to the Pyrenees. The plan was to eat as many famous Tour de France climbs as my emaciated legs could manage.

I sat in the campsite, thunderstorms brewing around me, pouring over maps. Geography and history became one as I earmarked climbs steeped in cycling legend.

I spied the Col du Tourmalet, where Eugene Christophe broke his forks, ran down the mountain to the local forge and welded them back together in time to finish the stage (he was later penalised for getting the apprentice boy to work the bellows as during this bizarre period of cycling history, all mechanical work had to be done by the riders themselves).

Then there was the Hautacam, where Bjarne Riis, bursting with EPO, launched an attack from the back of the peloton that lay waste to the entire field and showed the world that drugs are faster than motorbikes. 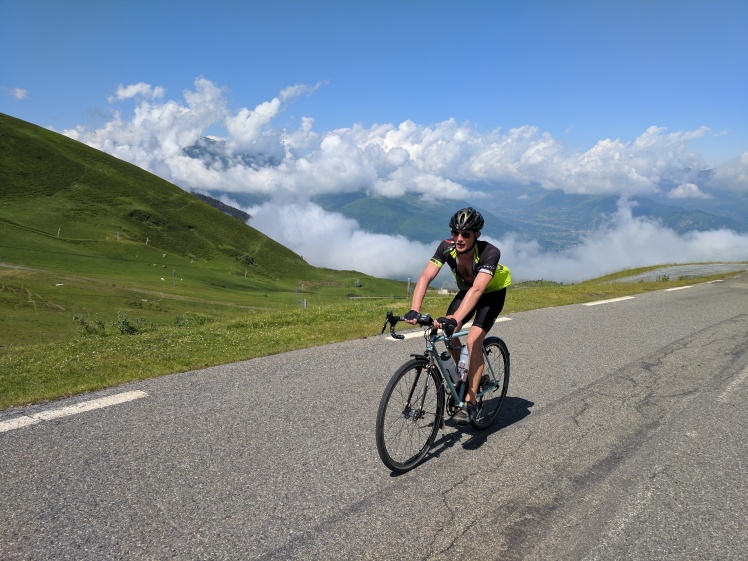 Not far was the Col d’Aubisque, the scene of Wim Van Est’s 70-metre plunge down a ravine. A tumble which he remarkably survived after even more remarkably being pulled out with a rope fashioned from tied-together inner-tubes!

One name however, didn’t resonate. The Col des Tentes. There is no history to speak of because the Tour is simply not allowed up there.

From the bottom of the far-more-famous Tourmalet, head south towards Spain and you find yourself in perhaps the most stunning mountain scenery in France.

The road gently climbs alongside the Gave de Gavarnie, the river fed by the colossal waterfalls at the head of the valley. For twenty easy kilometres we coasted on the smooth, wide road, punctuated with graffiti that perfectly demonstrated the area’s objection to outside intrusion. 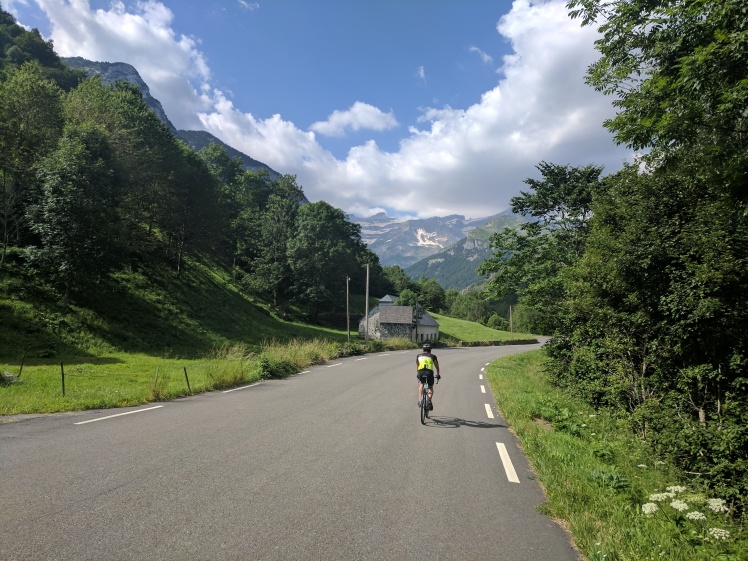 “Non aux ours!” or “No to bears” was painted in huge lettering every few hundred metres. Used to seeing “Allez Bardet!” or “Die Froome”, these anti-ursine messages weren’t what I expected. There are a mere 35 brown bears in the vast area of the Pyrenees, and in an attempt to boost their numbers, authorities have started introducing more amidst much opposition.

I’m not sure this tactic will be successful. It remains to be seen whether, when seeing a territorial intruder, the bears rip each other apart or make love. One thing is certain, the locals don’t care for it, and there’s a lot else they don’t care for.

The reason the Tour de France will never grace the slopes we were riding is because the area is a UNESCO World Heritage Site. There is too much red tape to cut through to stage the world’s biggest annual sporting event here.

Even if a loophole was found and the Tour fulfilled its dream of racing in such a remarkable place, the locals simply wouldn’t allow it.

If their opposition to bears seemed militant, then their reactions to the throngs of tourists in the town of Gavarnie is plain terroristic.

Gavarnie nestles in the shadow of the imposing but infinitely beautiful Cirque de Gavarnie, one of the views in Europe. This vast limestone amphitheatre with its mighty cascade quite rightly attracts hikers and outdoor enthusiasts from all over the globe.

As if this intrusion wasn’t enough for the locals to stomach, Gavarnie also sees people congregate for the yearly theatre festival. This event is so despised by residents that festival officials and volunteers have been attacked and car bombs have even been detonated!

If this is their reaction to a small theatre festival, what on earth would happen if the Tour stopped by? Tacks on the road and the odd shove would pale in comparison to the violence Gavarnie residents would be sure to bestow upon the race.

Sport, history and politics ceased to matter as we rounded a corner and were welcomed by the sight of the spectacular Cirque. I shared in the locals’ disdain for crowds as we weaved through the throngs in Gavarnie to get a closer look at the Cirque’s face.

We were drawn to the landscape, taking a completely wrong turn away from the road we were here to climb. Like a moth to a flame, we rode our highly unsuitable bikes along a gravel track in awe of the natural spectacle that makes the Tour organisers salivate.

The road got a bit too gnarly, and as fat tourists started to struggle with the slopes, I knew my 25mm road tires wouldn’t take kindly to the gouged path. We skidded back along the track to our intended route with the Cirque at our backs.

The climb out of Gavarnie leaves the Cirque but cuts into a new and equally beautiful mountain vista. The easy gradients up to now mutated into sapping 10% averages, with even steeper ramps. Several people I passed chose to cycle sideways to mitigate the slope. 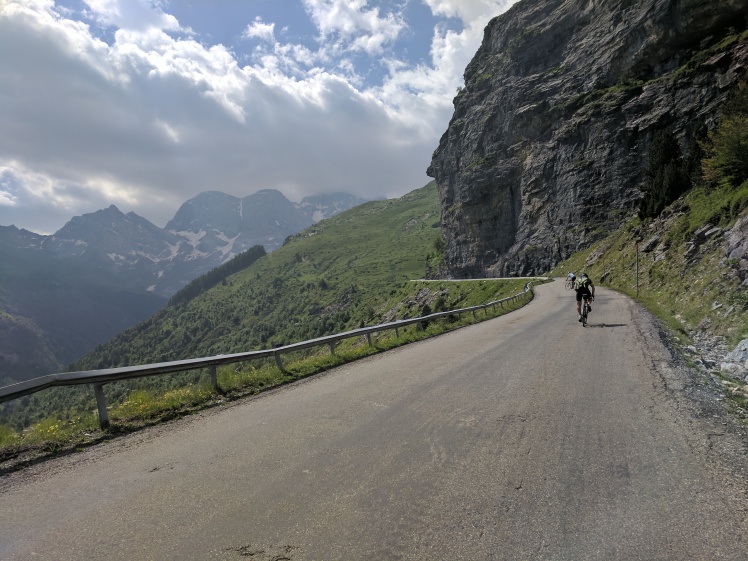 I looked back down the valley onto the hairpins draped over the mountainside. This was a scene straight out of road cyclist’s wet dream, one that seemed so well suited to throngs of spectators in fancy dress, heavy-handed gendarme and a line of pro riders on their physical brink. Instead, I was alone with my heavy breathing and a startled marmot. 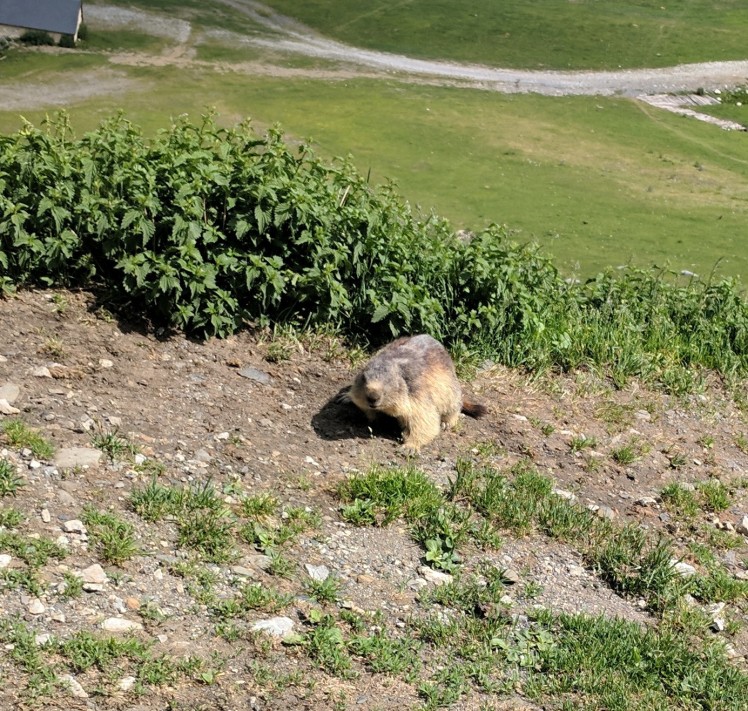 Indeed, the only spectators to speak of where the decidedly disinterested livestock. This crowd of cows were even less respectful than the drunken nutters that ordinarily frequent mountain stages of the Tour. The high mountain was their area, and they weren’t moving from the road.

I spooked several twitchy cows as my rear wheel skidded on the roadside gravel I was forced to ride on. My last cycling trip had been marred by an acrobatic crash and I was certain this one was now going to end in cow attack. 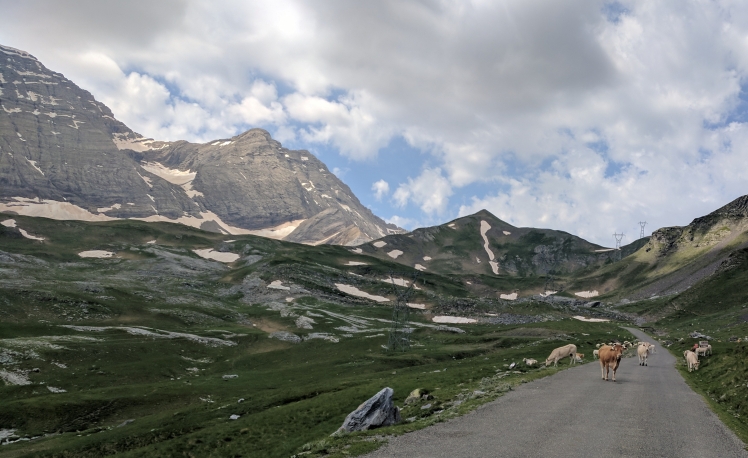 I escaped and climbed higher alongside dirty snowbanks, always a novelty in July. After thirty kilometres of climbing, we topped out at the Col des Tentes. Behind us was the most spectacular cycle I had ever done: from a towering verdant gorge, through picturesque mountain villages to the apex of the Pyrenees before the chilly world of limestone and snow tumbled into Spain.