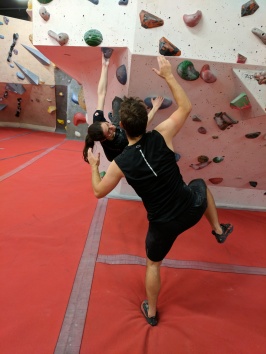 “Mate, if you hold that undercling like you’re trying to coax a sneeze out of a shy badger, and bring your left foot up to somewhere near your right ear, then you’re sure to scend it.” You were peppered with this monologue after only disinterestedly attempting the climb once, jumping off halfway to see the mate who’s just walked in, and then grab a coffee.

You want to say, “I don’t care, I know I can climb it, go away.” The socially-acceptable part of you however makes you listen to the entire speech, punctuating with nods and grunts of approval. Your reparation is swiftly delivered however, as this person then attempts the drivel they’ve been preaching and barely gets off the ground or falls and hits the floor like a sack of spuds.

Swoop In, Climb It, Bugger Off 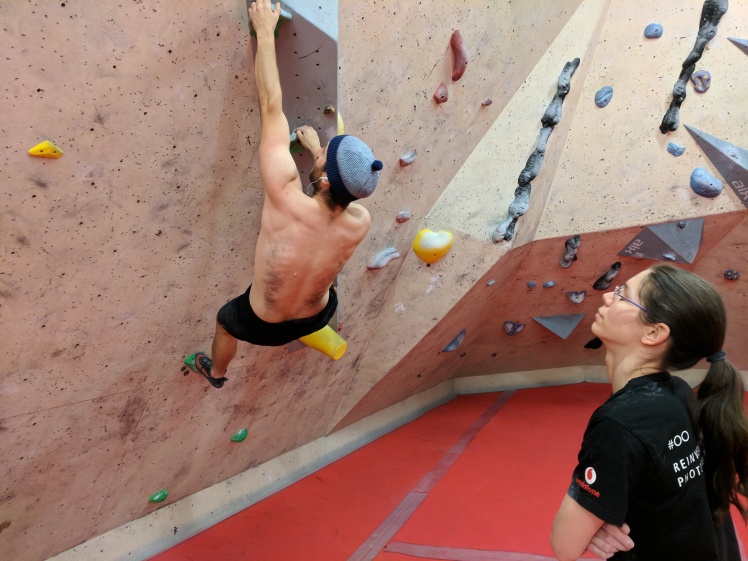 It feels like you’ve been attempting this climb, nay, that one move, for the best part of an hour now. You’re tired and just want to finish it so you can move on with your life. Time to step back, give it some space and recompose yourself.

This is the perfect opportunity for this person to sneak in – someone who’s not at all interested in the route – just interested in making you feel as small as a screw on smear.

They fly through the moves, dispatching the crux with nonchalance, knowing how much it hurts you. When they float back down the wall you look at them, angling for an admission that it was a bit tricky, some beta maybe, or just to be acknowledged as a fellow human being.  Opposite to the beta-sprayer, this cretin simply avoids your gaze and walks off feeling like they have won.

Top tip! These types often wear headphones which double up as an effective garrotte. 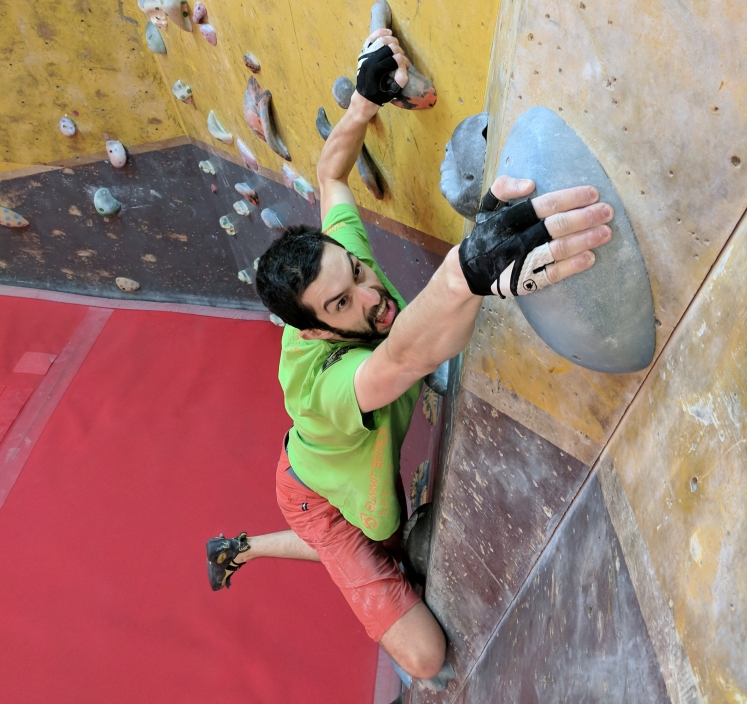 The indoor climbing wall is what I like to call The Thinking Man’s Gym. We don’t simply pull weight against gravity for muscular gain, we exercise our brains as well as our bodies. There are those that seem intent on blurring the lines by wearing fingerless weight lifting gloves (also see Newbie). Your dry, worn, calloused hands are a badge of honour, soft skin is overrated and not helpful! 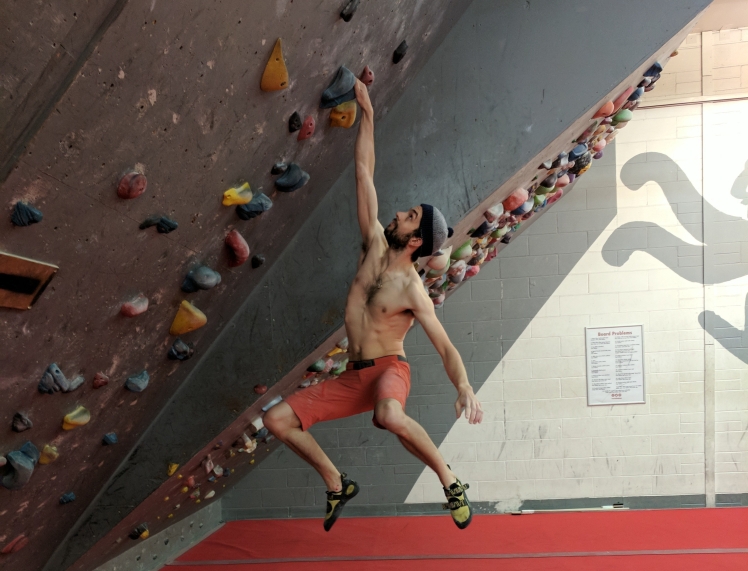 It’s minus five outside, and not much more indoors at the climbing wall, particularly under the fans. These are the ideal conditions for the Show-Off to discard their stifling T-shirt (making sure the beanie stays firmly on, so long as it doesn’t cover the ears) and campus stuff noisily. This person thinks they are the dog’s knees, the bee’s bollocks, a god of indoor climbing. Everyone else thinks they’re a bit of a tit.

The polar opposite to the Show-Off, this person dispatches difficult climbs quietly, meekly and with consummate ease. You want to hate them but doing so is as impossible as the series of contortional moves they’ve just strung together – they’re too nice and you want to be them.

The Person That Never Leaves The Training Area 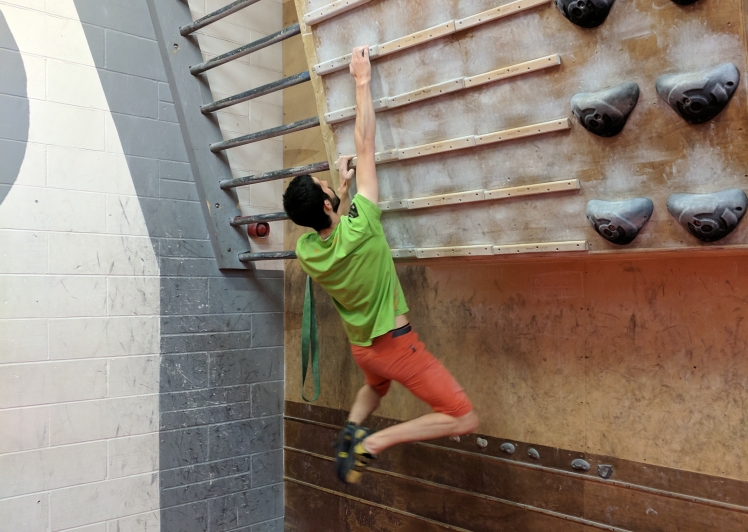 They can do pull-ups on their pinkies, finger-board to infinity and juggle kettlebells – but have you ever seen them climb? For most people, the monotony of non-climbing training is intolerable. Thirty seconds of stretching followed by one pull-up and a couple of yanks on an exercise band is plenty, we’re here to climb after all. Someone needs to remind this person of that; they might not even know they’re at a climbing wall. 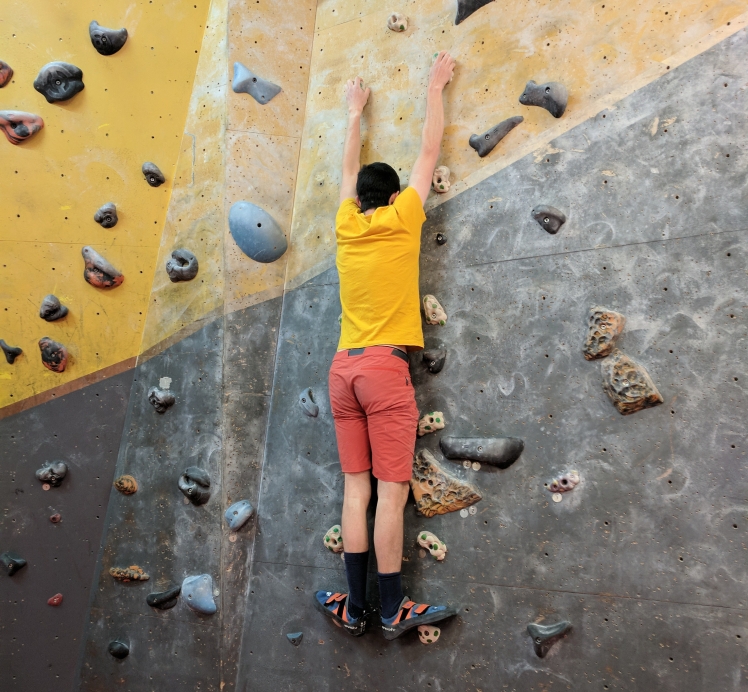 We were all newbies at some point in our climbing history, so I’ll remove the disdainful filter I’ve been using up to now. If the hire shoes that fit like slippers aren’t a dead give away, then surely the technique is.

Once they’ve realised that their feet are actually quite useful, have been stiffly reprimanded for several breaches of climbing etiquette, and have discovered heel-hooks – they’re well on their way to becoming a fully-fledged climber. 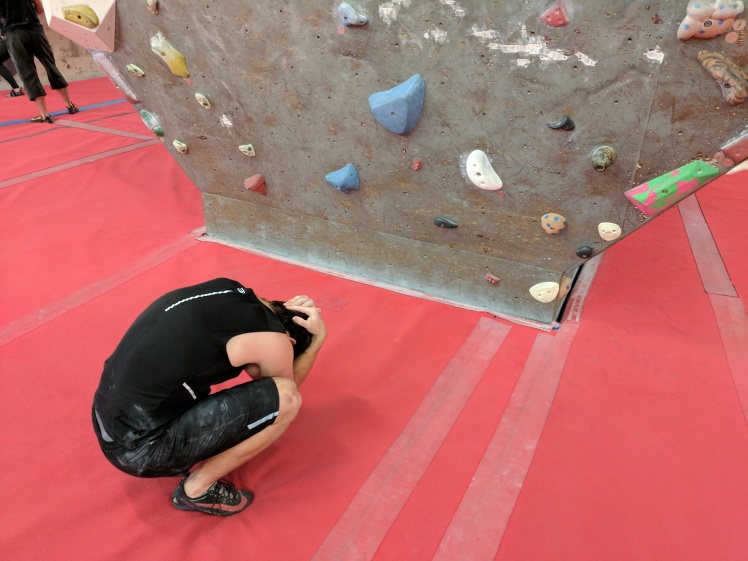 Is it a power-scream? A cry of pain after a bad fall? No, it’s the eighty-fifth time he’s tried this climb today and fallen off at the same move, and now he’s considering looping a noose around that jug up there. All sports have an element of torment to them, climbing ranks up there along with golf and snooker. For some, the frustration can become too much.

You’ll often see this lonely soul avoiding eye contact with the multitude of people staring at him, having profanity-heavy conversations with himself, and performing very forced and not-at-all-restful deep breathing. If they persevere instead of abruptly storming off, they often have an epiphany moment and climb the route as clean as you like. Suddenly all of the huffing and puffing seems a bit embarrassing. When scoping what climbs to attempt, as well as looking at the obvious things like grade, aspect and the types of hold, I also look down at the shoes of those attempting the climbs. Shoes can often be an indicator of ability – if someone glides up a climb in La Sportiva Solutions, chances are I will deck in a cacophony of grunting, puffing and whinging.

Shoes can be misleading however. There are plenty of climbers with shoes far better than they are, who would climb no different if they had bricks duct taped to their feet. Good shoes can help you climb harder, but can’t make you climb better. 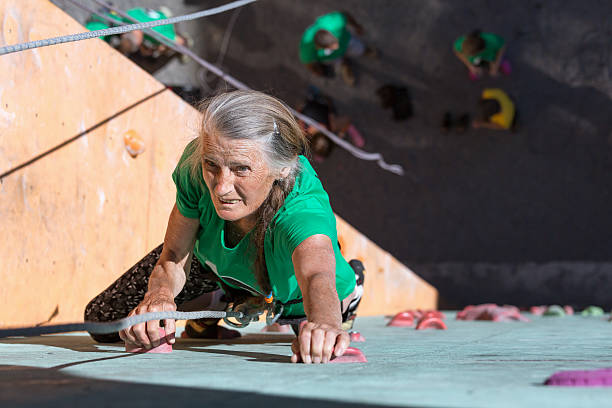 We all have goals in life. Some want riches, some want power, all want happiness. I want to be able to climb V7 in battered plimsolls at 75 years old. These climbers are as hard as the rock they’ve been crushing since they were teenagers. All this indoor stuff is a bit silly to them, who think nothing of climbing outdoors with enormous run-outs using dog-eared protection made in the 1960s. Wisdom comes with age, but is it wise to attempt huge dynamic moves after 2 heart attacks? More importantly, do they care?

Which one are you? Have I missed anyone? Comment below.

2 thoughts on “10 Types Of Indoor Climber”