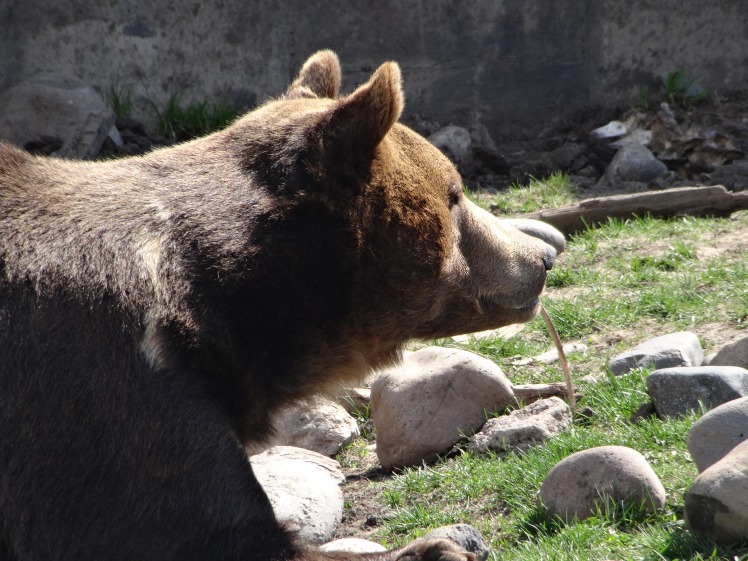 Aged ten, I went on a walk through the Essex countryside with my father that affectionately became known as “The Death Walk”. It achieved such status after being chased by a tractor down a narrow lane flanked by tall hedgerows, wandering into a ditch, falling foul of an electric fence, slipping numerous times on black ice and entering a field of unruly cows. Fourteen years later, happening upon a walk in grizzly-ridden Glacier National Park in Montana, comparatively, the Death Walk’s credentials don’t really seem to live up to its billing.

Having lived all my life in the UK post 1000 AD, I am not used to the concept of bears roaming freely in the woods. Therefore, upon arrival in the USA with my wife, with the prospect of spending the majority of our five months’ sojourn camping, I believe our fears were suitably justified.

Starting our trip only a few degrees north of the tropics, we thought we’d have the opportunity to ease ourselves into the idea of sharing our space with bears. Florida may have alligators that eat children at Disneyland, but not bears, and certainly not in January, they’re hibernating. Right? “Yeah, we had a bear here yesterday sniffing around the bathroom block,” our host for the evening calmly recounts, “guy came out, they scared each other and both ran away.” I can see my wife instantly freeze. I’m scared, but she is scared.

We previously discovered that modern American cars honk when you double lock them (rendering big WalMart car parks hilarious). Whilst bear attacks are not conducive to a good night’s sleep, neither is a sounding car horn every five minutes; my wife’s effort to scare off any prospective intruders. I was annoyed at my lack of sleep that night, but I still slept more than her after she admitted needing the toilet in the small hours but was too scared to walk the twenty feet to the bathroom block.

I had no intention of coming to a country with some of the greatest wilderness in the world and not going for a few walks. But I knew with a chance of encountering a bear, it was going to be a task to get my wife to venture more than fifty feet from the car. To that end, I had to educate myself, but not wanting to frighten her, my internet research became like some dirty secret; what to do in case of attack, bear populations in the various states, how to distinguish between grizzlies and black bears (Are you dead? No? Probably not a grizzly), unexpected encounters in the deserts of south-west Texas, Youtube videos of ruined picnics and broken car windows. I later found out that she was searching for the same. We rapidly became hypothetical bear experts.

I could feel my wife’s slowly building anxiety as we approached the states known to have grizzly bears (Washington, Montana, Idaho and Wyoming). Going through the drawers at our AirBnB in Kalispell, Montana, next to leaflets extolling the virtues of chicken fried steak at Syke’s Diner (it was great, I recommend it with the white gravy) was a can of bear spray. Shit just got real. 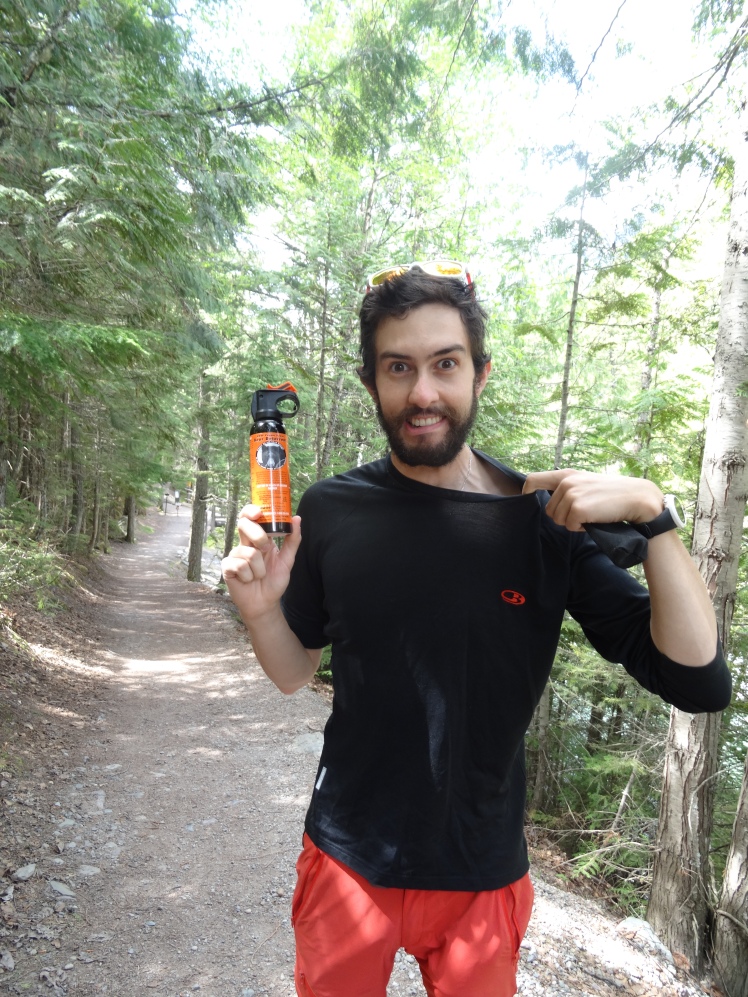 From our extensive research and a terrifying National Park Service endorsed video, we knew that bears can sprint up to 35 miles per hour. As if by some sort of sick joke, the National Park Service imposes a 35 speed limit on the roads of Glacier National Park (“Hey Ranger Bill, ten bucks says that red Chevvy with the scared looking British couple can’t outrun that bear!”). I diligently kept the speedometer pegged at 36. 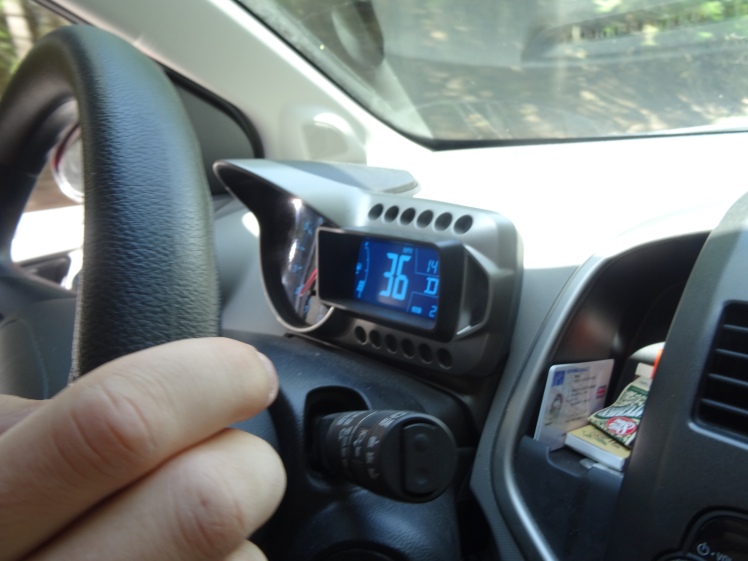 Once we’d plucked up the courage to step out of our car, a sign on the trail calmly stated that we were definitely going to be stalked and murdered by a bear. Don’t even think of exercising your right as an American by shooting it, apparently this only pisses them off. Armed with a spray can of glorified hot sauce, feeling manly if not for the little bit of wee running down my leg, I passed the sign but my wife stayed rooted to the spot. Clap your hands and shout “Hey Bear!” was the advice, so as not to accidentally sneak up on and startle them. I couldn’t help seeing this as more of an invitation than a deterrent. 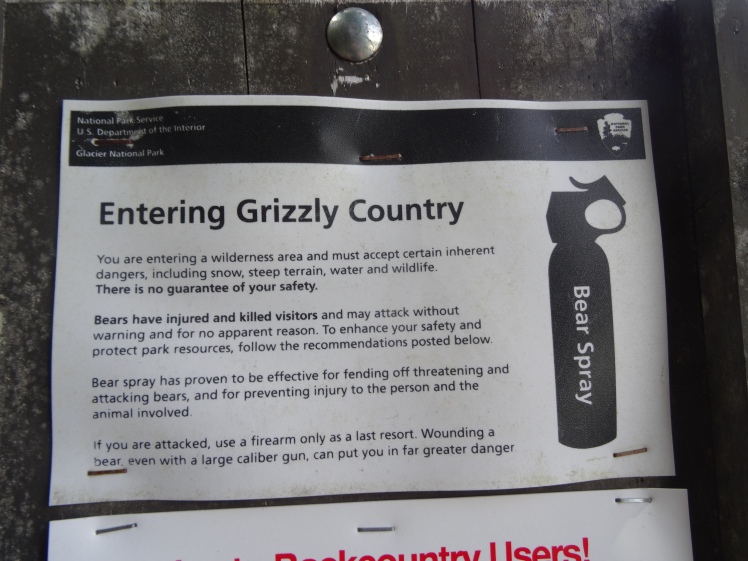 After our (brief) walk, having achieved not being eaten and feeling a bit confident, we drove deeper into the park down a dirt track in search of scary fauna. However, the scariest we found was an obese family thinking it was a good idea to leave an extensive picnic unattended on a bench. Through fear of them eating us after they found their own food stolen by a bear, we left. 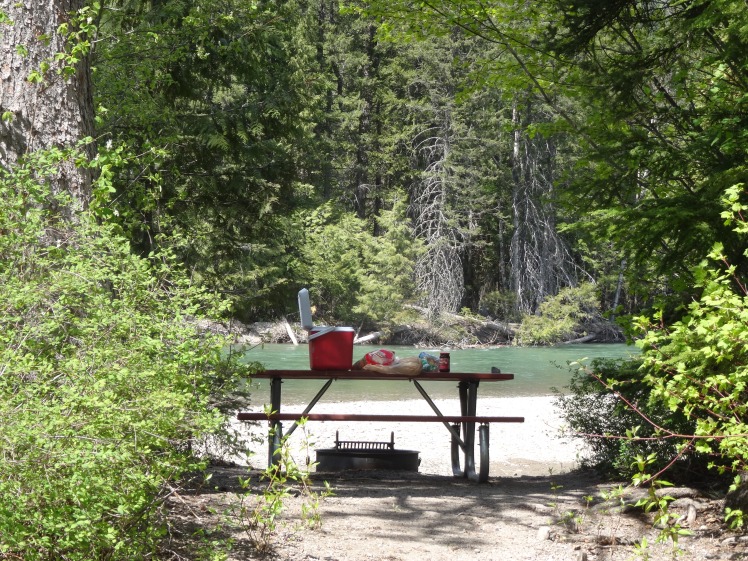 Three months in and we hadn’t yet seen a bear. We needed to break that ice, look one in the eye to know that we needn’t be scared. Montana Grizzly Encounter Sanctuary gave us that opportunity. In the outdoor enclosure on the day of our visit was Bella. Latin for “beautiful”, it is certainly nicer than the Latin name for a grizzly, “Ursus Arctos Horribilis”, pretty much meaning “big horrible bear”. Her distinctly bigger male companion was Jake. These are also the names of two lovable characters in the children’s TV show “The Tweenies”, someone is mugging me off. Our visit, whilst fascinating, had the opposite effect to the desired one. Jake and I shared a moment, our eyes met thirty feet apart and I could feel his teeth and claws in my soul. Searching for his fruit hidden by the keepers, he brushed aside a rock the size of a car tyre with the same effort I expend lifting a spoon to my mouth. Distinctly more anxious, it was time to move on. 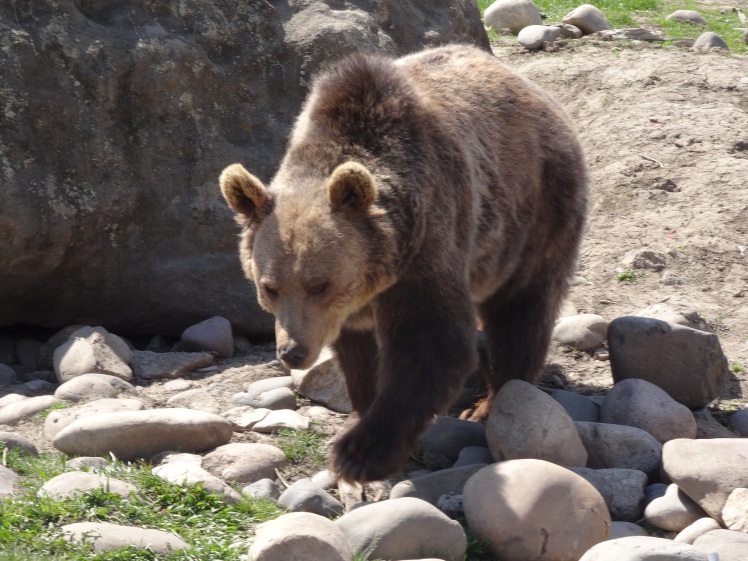 Shenandoah National Park was where we had our first wild encounter. Ambling along Skyline Drive at 35 miles per hour (what else?) I spotted what looked like a big dog in the roadside shrubbery and excitedly told my wife to stop the car. Her reaction and that of the bear couldn’t have been more different. This bear had the greatest indifference to us and everyone around it, whereas my wife hyperventilated and forgot how to drive. Neglecting my Youtube education, I told her to open her window so I could get a better photo. “Are you insane?” she hissed at me. Despite traffic building up behind us, we watched for a minute or two as the bear packed in its calorie quota for the day and plodded through the growth more like Winnie the Pooh than the ferocious killing machine we feared. 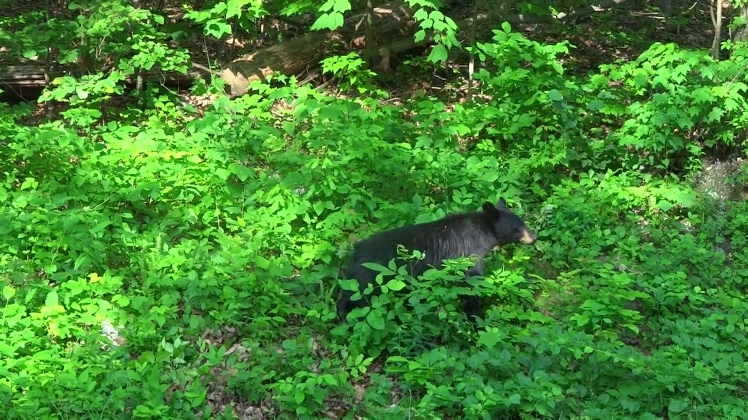 The day after, on a trail, we stumbled across a mother and cubs. This was the combination that we had been warned about. However, as before, these bears didn’t give us a second thought. Shenandoah is within a three-hour drive from Washington DC, Baltimore and Richmond which makes it a highly visited park, so the novelty of humans has probably worn off for these bears. Even so, we didn’t linger to bother these bears any more than necessary, instead we rescued a salamander from certain death on an overpopulated trail.

Coming full circle back to Florida, intense heat and the threat of hurricanes occupied our travel worn minds more than the bears did. Slightly disappointed but somewhat relieved to have not seen more bears on our trip, I unwound on the plane home by watching Leonardo DiCaprio get mauled by a grizzly in The Revenant. Now back in the UK and with a useless knowledge of what to do in a bear encounter, it feels strange walking in the forest not having to intermittently shout “Hey bear!”.

One thought on “Bear in Mind”